Not much to celebrate but

Minutes before her first song started, Ceci Bastida hid behind a speaker on the California Plaza stage, moving her hands up and down trying to call the attention of her daughter being carried a few feet apart. Bastida put her thumbs next to each cheek and extended her hands like a fan on each side of her face, sticking out her tongue to make her laugh.

Bastida’s presentation was organized by Grand Performances and Mexican authorities, to highlight Mexican artists to celebrate Indepence day, September 16. There’s not really much to celebrate since the war against drug trafficking in Mexico has given few positive results and instead has submerged many citizens in a world of insecurity they must deal with on a daily basis.

But that doesn’t mean that people don’t continue to live in Mexico nor that artists have stopped playing. In fact, neight Bastida nor Descartes a Kant, the two presentations I had the opportunity to see yesterday have let the violence affect their work.

They haven’t ignored the issue either, they actually face the violence and insecurity with their own interpretation.

During Descartes a Kant’s act, there was a moment when Sandrushka Petrova and Dafne dressed as thieves with black and white stripes, carrying white sacks with the money sign and silver guns, pointed at the audience and acted out an assault. The stage is separated from the public by a shallow pool, acting as a buffer zone for the assault though clearly fake, it did cause a flashback to the day I was assaulted while I worked at a store. It was a strange sensation, I knew it wasn’t real but their act still carried a strong emotion and I think that was the intention. Descartes a Kant includes performance art in their shows and it’s an impotant element that doesn’t take away from the music, it complements it. 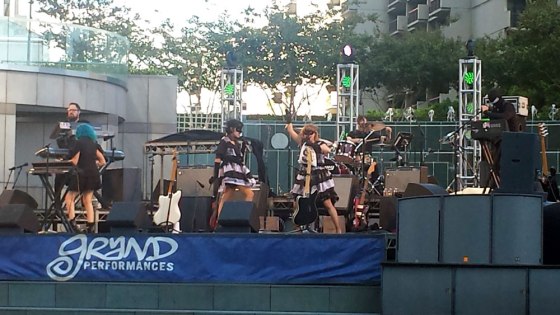 Most of their songs are in English and their sound is far from being defined by their hometown of Guadalajara. It’s easier to say that they are fearless when it comes to exploring genres. A single song can go from jazz to punk, driving by garage and arriving on big band sound. Petrova’s, Dafne’s and Charlkovski’s piruettes help to follow the racous and sublime changes of their instruments. From what I have seen from pictures of ther presentations, their perfomance in the plaza yesterday was demure. “We are not going to hurt you, don’t be scared,” Petrove assured the audience at the beginning of their show. 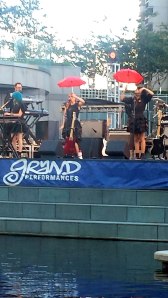 When it came time for Bastida, her microphone didn’t have the optimal volume as she was singing her first song, drowning her voice between the drums and the horn section of “Una vez más.” After the second verse the audience was finally able to heard her voice.

“Thank you for having the energy to come,” Bastida said, mentioning the 104°F that was lashing the afternoon. Fortunately the high rises surrounding the plaza gave ample shade and a light breeze was keeping the heat afloat.

The catchy nature of her songs are a sharp contrast to the rawness of her lyrics. In “Por la calle” the words describe the fear of going out into the

streets and facing possible danger, ‘I want to live in peace, tranquility,’ she sings in the first verse. It’s a song that makes you want to dance, but maybe only at home, where it’s safe. Her latest album, titled Edad de la violencia (Age of violence) has a cover with flowers in vases, a feminine touch to an aggressive title. She produced most of her songs while she was pregnant and that contrast between the harmony of creating a new life and the death that surrounds Mexico was finely captured in her songs. It’s a happy electro pop and it carries the esence of rock from a past era when she was a singer for Tijuana No, one of the boldest mexican rock bands from the border city. But this is a different era, her voice is not overtly melodic, more so direct, but she knows how to build choruses that stick.

There is nothing to celebrate on Mexico’s national day, but Bastida and Descartes were able to express joy in the midst of chaos that their home lives in and brought some of their music, dance and theatre to Los Angeles.